In recent days, the release of the FAW Liberation J7 offline and the L4 series of smart cars with the theme of â€œThe wisdom of the world is endless and endlessâ€ was held in Qingdao, Shandong. The liberation of the J7 off-line ceremony was held simultaneously at the production base in Changchun, marking the liberation of J7 into the mass production stage, one step closer to the official listing. 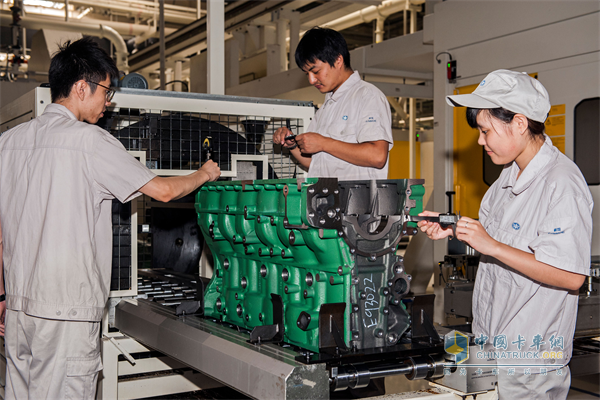 According to the person in charge of the liberation related technology, as a world-class high-end heavy truck for the import of European standard trucks, this J7 is the seventh-generation heavy-duty truck product that was successfully built over the past seven years. From appearance to interior, from configuration to detail, from design to manufacturing, J7 has completed a revolutionary transformation on the basis of J6. It is worth mentioning that the Jiefang J7 power system is equipped with the CA6DM3-50E5 Aowei engine of the FAW Liberation Engine Division (hereinafter referred to as â€œengine business departmentâ€), with 13 liters of displacement and 500 horsepower, which is the mainstream large displacement in China. One of the high-powered engines.

â€œSome time ago, the Jiefang J7 equipped with the Aowei engine was compared with international products. It crossed the Gobi, challenged the plateau, passed the mountain, passed the coast, crossed 26 provinces, reached an altitude of 5,200 meters, and had a bicycle mileage of nearly 30,000 kilometers. , And the test results show that not only the overall performance of J7 reached the level of European contemporary car technology, but also proved the superior reliability of the Aowei 13L engine, we have full confidence in the national brand of Aowei engines.â€ Shangqiu City, China FAW Automobile Trading Co., Ltd. The person in charge of the company said sincerely.

As we all know, the secret weapon that emancipates the heavy truck all the way is the Aowei machine that is known as the dirty "core" of the vehicle. As one of the engine products of the engine division, Aowei Engine has passed the time of baptism and witness. It has become the most advanced and most fuel-efficient engine in the country, and its fuel economy and high efficiency have formed a comprehensive market reputation. The reason is inseparable from the persistence of the engine division's adherence to craftsmanship.

When it comes to the spirit of artisans, one must mention is Gu Jian, a senior technician in the Engine Division. As the saying goes, if a person is prosperous, innovation will be strong; if the skills are good, then the industry will flourish. For the team that is indispensable to the development of the company, every talent is the ultimate foothold and best annotation of the spirit of the company's craftsmen.

After graduating from the Wuxi Technical School in 1993, he entered the Engine Division. From 25 years of apprenticeship from bench to multi-task, from the maintenance of the outsider to a senior expert in FAW, Gu Jian used his own actions to interpret the Chinese craftsman's practical sneaking, love, and dedication. Dedicated dedication to cattle spirit.

When he first entered the factory, Gu Jian worked as a fitter in the workshop and was responsible for the manufacture of molds, tooling, and fixtures. The fitter's job is very monotonous and requires a lot of patience. Gu Jian continued to delve into the fitter skills and took up more difficult assembly and repair work in the workshop. In 2005, he voluntarily applied for transfer to the refinement team. In the next thirteen years, he only did one thing, repaired, repaired, and then continued to repair.

In the manufacturing industry, maintenance of electric spindles is a big problem: Buying a new electric spindle requires more than 1 million yuan, and subcontract maintenance costs more than 200,000 yuan, and the warranty period after repair is only three months. The technical difficulty of maintenance is to reach a precision of 2 microns in the middle of the spacer of the bearing, equivalent to 1/35 of the diameter of the hair filament. Insufficient accuracy will reduce the service life of the bearing and cause the bearing to be scrapped. For this kind of process with high difficulty and technically rigorous testing and maintenance, the machine is obviously not as powerful as it is. 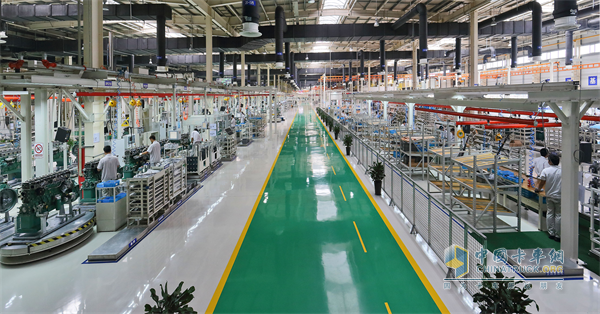 In the absence of drawings and without any spare parts, Gu Jian took the team down with this "hard bone." He trained for 5 years from the silk level to the micrometer level, and then from 5 microns to 2 microns (2 microns only 1/35 of the hair), he practiced for 10 years. In the end, it not only achieved the precision requirement of 2 microns, but also found the problem of rear bearing burns, and replaced the bearing steel balls with ceramic beads that can withstand higher temperatures, filling the gaps in the maintenance technology of imported electric spindles, saving the engine business department every year. Maintenance costs more than 3 million.

When grinding parts, Gu Jian used to remove gloves and use the skin to sense accuracy. Over time, the scorpions in their hands grow thicker and the fingerprints become blurred. Every time you punch and go to work, you must press several times repeatedly to succeed. However, it is these two hands that sense the precision that even digital control equipment can hardly achieve.

"The growth of skilled workers is a relatively long process. We must not forget the beginning of the heart, endure loneliness, and work hard towards our goals." Gu Jian said.

At the human level, if we have the ultimate pursuit of quality for one thing, and we continue to pay time and effort for it, we call it "artisan"; and at the corporate level, if a company is good at learning, diligent in research, Encourage and focus on technological innovation and innovation. We can also call it "ingenious enterprise" with the craftsman spirit. Qian Hengrong, general manager of the Engine Business Division and party secretary, believes that for traditional manufacturing, technological innovation is the most important innovation. Follow-up innovation has no way out, and it must take the lead in innovation.

The development of the Engine Division over the past few years has clearly illustrated the role of independent innovation in market promotion. As we all know, in recent years, the dividends of the GB1589 policy has subsided and the exhaust emissions of automobiles have been upgraded. The Chinese engine industry has been hit hard, but the market trend of the engine division has turned against the overall market.

It is worth mentioning that the engine division's R&D expenditures account for more than 5% of sales each year. It is also the integration of Wuxi Pump's R&D resources. It has expanded its forward-looking technology research department at the Xichai R&D center to become a forward-looking technology research institute. , The engine development institute located in Changchun was established as the engine development department, and the original Xichai R&D center was established as the engine development department. Internally, the Engine Division encourages employees to innovate and innovate, through the establishment of a â€œdual-trackâ€ model for the management of key projects for the management of key innovation projects and the management of green projects for basic businesses, deepening the distribution of innovation incentives, and intensifying major innovation and incentives, and employeesâ€™ enthusiasm for innovation. And the concept of innovation has improved significantly. In 2017 alone, the total number of invention patents reached 470.

In the report of the 19th National Congress, "Building an army of knowledge-based, skill-based, and innovative workers, promoting the spirit of model workers and the spirit of craftsmen, and creating a glorious social atmosphere and an ethos of excellence". Made in China 2025 and Industry 4.0 provide a clear policy direction for the development of engine companies, and the current supply-side reforms that are being implemented on a large scale are intended to effectively improve the contradiction between supply and demand mismatches and require the spirit of craftsmen to guide companies from being extensive to lean.

In the past 2017, the total engine sales of the engine division exceeded 310,000 units, and the main business revenue exceeded 10 billion, and the profit has reached a record high. The company's indicators are at the forefront of the industry. The Engine Division is a microcosm of Chinese manufacturing companies. The analysis of the craftsmanship of the Engine Division can also be read from another aspect to understand the reasons for its growth.

Looking from the engine division, we can easily see that continuous technological progress has made more new products appear, giving us comfort and convenience. What is hidden behind this is the efforts made by scientific and technological workers to innovate in R&D and make continuous breakthroughs. These breakthroughs and efforts are shining with the spirit of craftsmanship. Like the engine business department, it provides users with more convenient and comfortable products, provides more reliable life protection and a more relaxed working environment for employees, and allows society to use its resources to maximize its value. Such an enterprise is an â€œingenious enterpriseâ€. It is also based on this that the engine business department will emerge a group of artisans who love and respect the work, silently stick to it.

China's manufacturing industry has long been using "low-cost, large-scale" extensive growth, resulting in China's manufacturing is not strong, but rather the status quo. The Chinese manufacturing industry, represented by the FAW Jiefang Engine Division (hereinafter referred to as the â€œEngine Divisionâ€), has always adhered to the spirit of craftsmen, and has focused on the transformation and upgrading of supply-side reforms. It has developed a continuous upward-looking development curve, and through globalization The steady layout of the game allows us to see the role of domestic brands in the global stage and greatly improve the international discourse rights that China has produced.

STC Three Phase Alternator Suppliers
This series generators are to be used in town, countryside, worksites, mountain and pasture as electric power source for lighting purpose, it can also he used as reserved power source for emergent case using.

The generators are of dripproof with rotary field type and adopt harmonic excitation system, easy operation and maintenance.
The generators are three-phase, four-wire type, adopting star connection with neutral point. The rated line voltage is 400V, phase voltage 230V, frequency 50Hz. power factor 0.8(lag). We can provide 60Hz and the other voltage's generator according to the customer's request.
They can be coupled with a prime mover directly or through v-belt making right or reverse continuous rotation at the rated speed. When the rotation speed of prime mover changs 3% or so and load varies in the range of 0~100% cos j 0.8~1.0, the generators offer constant voltage, when sudden change (increase or decrease) of load, the generator will soon return to their normal working state, at the same time, without any starting device the generator can directly start an unloaded squirrel cage induction motor.

Operating Condiyions:
Under the following environment, The generator could be continuous and rated running:
1.Above sea level: Not exceed 1000m
2.Cooling air temperature: 258~313K(-15 oC ~ 40 oC) 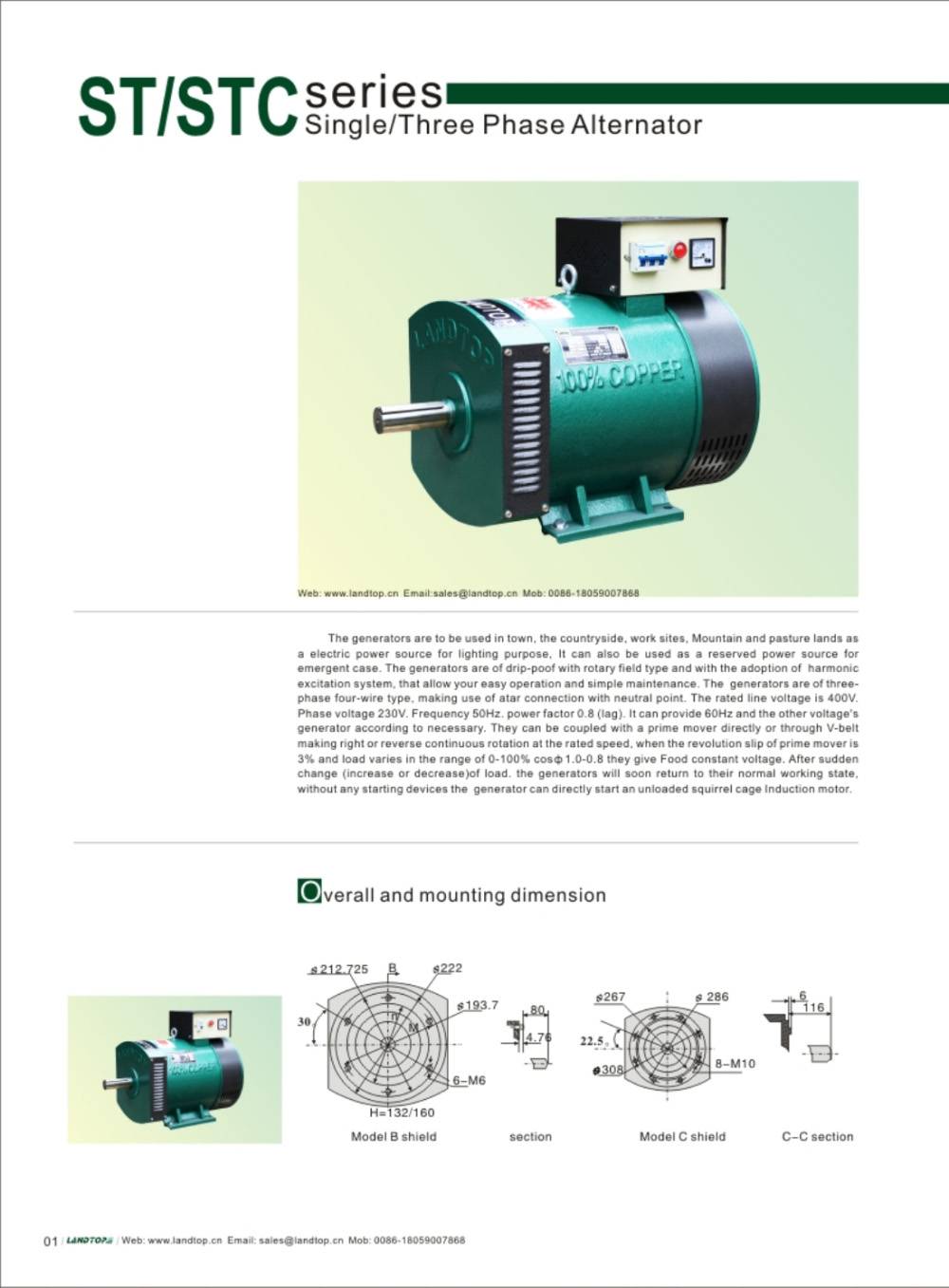